BEHIND THE METAL – POP SCULPTURE

HOW TO CREATE MOVEMENT FROM METAL: DORIT’S CREATIVE PROCESS

At the forefront of Pop Sculpture, Dorit Levinstein uses metalwork to compose pieces representing familiar images as simple as farm animals and flowers and as diverse as modern icons and classical artworks. The question is, how does an artist take seemingly inconsequential figures and images and provoke meditation on their existence, function, and meaning?

Using a fluid, and deeply creative process that she calls, “a choreography of matter,” Dorit essentializes her figures into sculpture. Without making any preliminary sketches, she works intuitively, beginning without a sketch, but instead “drawing” three dimensional figures in space. After thickness and volume are added and revisions made, the piece is cast in bronze before it is painted. Here, sculpture, inherently full of depth, is flattened by the color and pattern painted onto it. In this way the sculpture can be several things at once, a fluent articulation of objects which are understood both simplistically, symbolically, and superficially, but still contain tremendous depth, complexity, and versatility.

Take “SLOW MOTION,” a colorful interpretation of the tortoise, for example. The tortoise, a character of some of the world’s most famous folklore, and even often featured in modern movies and television shows, progresses slowly across the floor, without ever moving an inch. The dynamism of Dorit’s sculpture involves the movement, the line, and even the personality of the sculpture, almost unexplainably present in each of her works. The same is true of some of Dorit’s renditions of some of the world’s most intriguing and complex figures. In “ELVIS,” Dorit uses all the regular proportions of Elvis’s face, his signature hair, lips, and blue eyes, but implied in the lines of his eyes is Elvis’s famous depression, leading to his later drug use.
“MATISSE DANCERS” almost leaps off the ground, inspiring the same feeling of hedonistic comradery Matisse’s did so many years ago.

Instead of duplicating images in the style of a naturalistic sculptor or painter, Dorit instead explores a new facet of her subject, doing her best to make them dance on their own, and allowing her imagination the freedom to discover their inner impulses. One of Dorit Levinstein’s great talents is the grace with which she captures the essence of her subjects, and the subtlety with which she pulls it off. Some of these are just too good not to see in person. 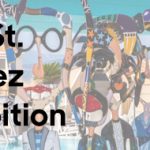 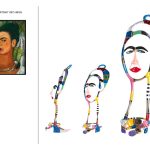